By Mars the monkey (with help from PI Behavior Specialist, Breanne Cyr)

It’s been a while since we’ve shared news from the world of monkey social dynamics at Primates Inc. Let Mars, a 16-year-old rhesus monkey at Primates Incorporated, catch you up to speed:

As you may recall, I had been living in an enclosure with Timon since spring of 2019. Timon is a great guy – he is very submissive, and I am very dominant – so he would never challenge me. He would happily groom me when I wanted, and we were both happy with that. Over time, however, our bond weakened. I might have gotten a little over-confident with him. Eventually, I would approach Timon to groom me, and he would get scared and run away, which was frustrating for me and too bad for him.

Meanwhile, across the hall, my peers Izzle and Batman were living together in an enclosure. I watched a similar course happen with their relationship – first they were pals, but then Batman started avoiding Izzle. We all noticed that Batman was less active and less content. I tried to comfort Batman from across the hall by sending him friendly gestures such as lip-smacks. I would bark at Izzle and stand up for Batman when he needed it.

Similar to you humans, relationships evolve between us monkeys. Sometimes our bonds strengthen over time, and other times, we start getting annoyed or frustrated with each other and we want change. Fortunately, even though we don’t speak the same language as our human staff, they know our language well enough to know when we are ready for a change.

In this case, the best option for everyone was to have Batman join me and Timon, forming a trio. Now we are basically the “Three Monkeyteers!”. Timon and I have grown closer again, and he is less afraid of me now that he has Batman to watch his back. I enjoy my dominant status in the trio, but I’m a nice guy. Timon and Batman enjoy grooming me every day, and sometimes they groom each other. The two of them often like to snuggle up on a bench at night to sleep and I have to admit, they are pretty darn cute! Usually, I don’t get too jealous of Batman and Timon hanging out with each other. Occasionally, I’ll remind them that I’m the top monkey and I want things my way, but I’m a rhesus monkey, so some aggression is in my nature. 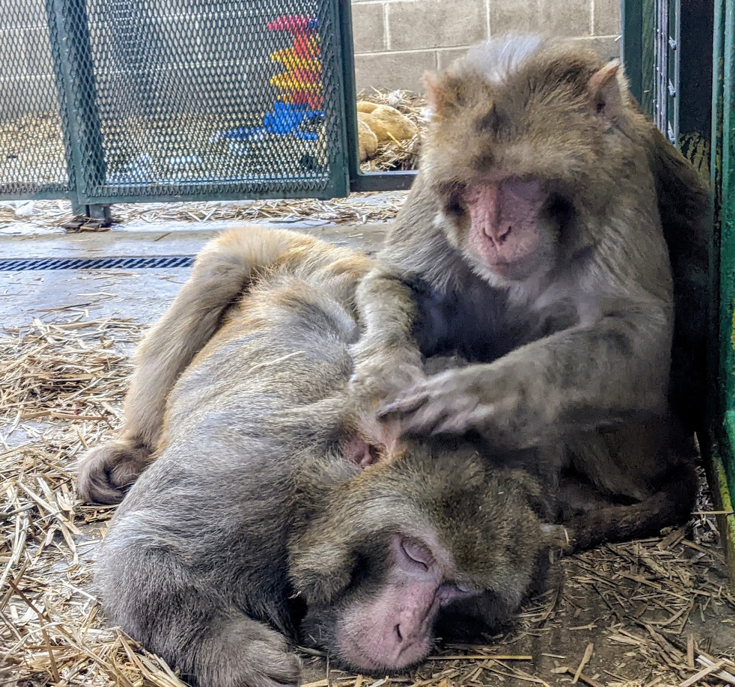 Overall, we “Three Monkeyteers” are showing improved welfare and happiness since becoming a trio. I am happy to report that while I used to struggle with self-directed abnormal behaviors, since this new change in the fall of 2021, I am doing my best ever since my arrival at Primates Incorporated in 2018! My self-directed behaviors have mostly subsided and are much less intense. Batman and Timon have become more active, social, and confident, which is also great news. 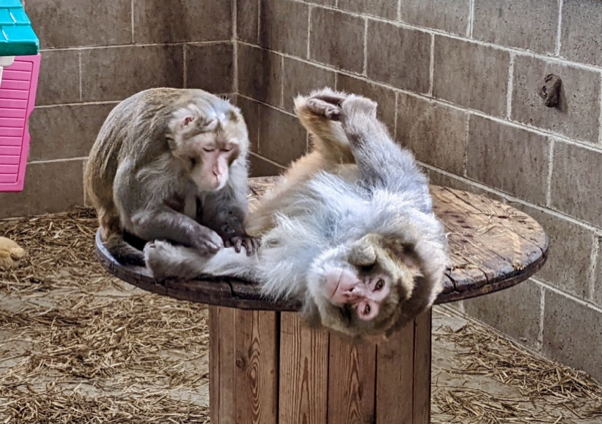 Now you may be wondering about Izzle – isn’t he alone now? The answer is “Yes.” However, he does share a “fine mesh” wall with Rocky and Junior. He always gets fed first, and he gets extra special attention from staff until he gets another monkey pal again. Fortunately, Izzle doesn’t mind having his space all to himself, but of course monkeys are social creatures so we’re all rooting for him to get a pal again!

Although I’m not a big fan of Izzle and would never welcome him to join the “Three Monkeyteers”, I do want him to be able to live with another monkey. In fact, at Primates Inc, we have one other monkey, Fargo, who is living on his own, and I happen to think Izzle and Fargo might be compatible roommate buddies! I’ve even seen them lip-smacking across the way a few times.

I overheard that staff are working on introducing Izzle and Fargo. However, there is one problem – the two monkeys are on opposite sides of the building! In order for Izzle and Fargo to get to know each other safely and decide if they want to live together, they need to be near each other, but protected so they don’t fight and get hurt. The humans have been raising money in order to build elevated walkways so that the two of them (and any future monkeys!) can get from one side of the building to another. I encourage you to support that project for my pals. Of course, the rest of us need ongoing professional daily care as well – so on behalf of all the monkeys at Primates Inc., I’d love it if you’d check out https://primatesinc.com/support/ to see how you can help! 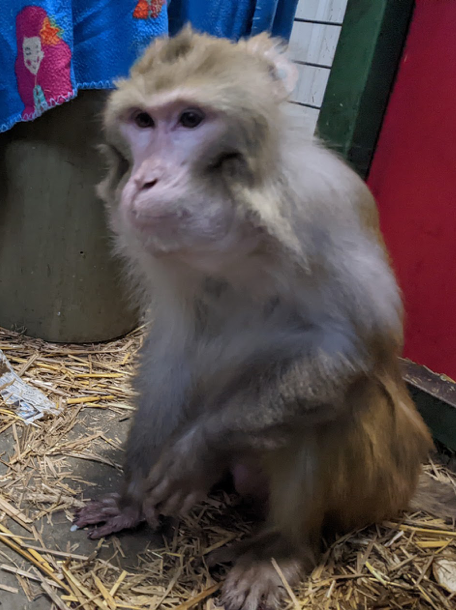 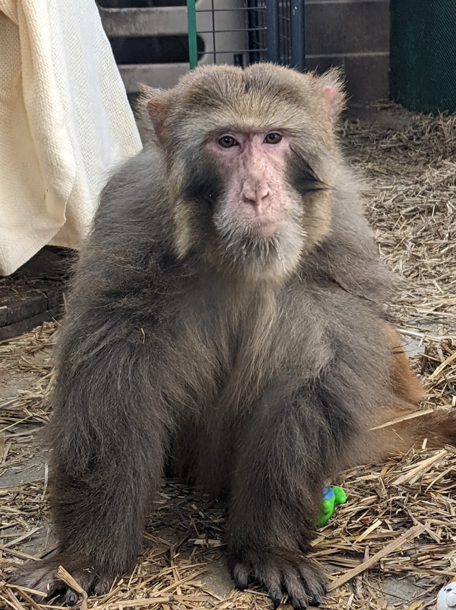 Well, the sun is peaking out so I’m going to head outside to forage and catch some rays and fresh air with Batman and Timon now!